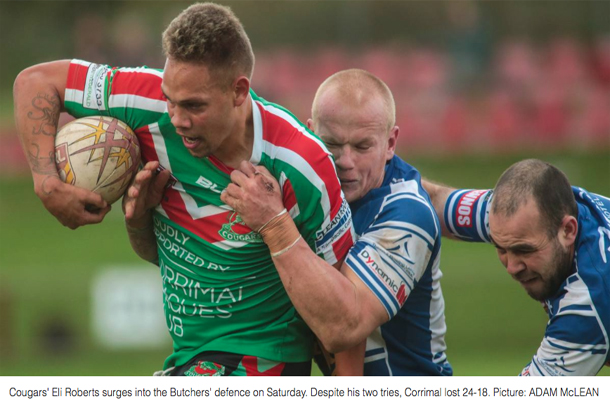 Both teams were prepared to throw caution to the wind, as Thirroul prevailed 24-18, but were constantly threatened by the resurgent Cougars.

The Butchers’ win denied the Cougars a third straight victory but the spirited display proved that their two on the trot leading into the clash were no fluke.

The win wasn’t enough for the Butchers to leapfrog the Cougars into the top four, with the defending premiers lagging on on for-and-against points.

“Attack-wise, we’d been a bit disjointed so we gave the boys a bit of a licence to play the footy we know we can play,” he said. “We’ve got naturally creative ball players … we wanted them to go out there play ‘what they see’ and it worked.

In the absence of regular playmakers Ty McCarthy and Willie Stowers, Zac Green and hooker Joel Johnson were among the Butchers’ best but Swain reserved special praise for veteran No 1 Brent Grose.

“He’s the oldest bloke in our team but he’s absolutely on fire.

“He was excited by the opportunity [to play fullback]. He gets the ball in his hands a bit more and plays a bit more of a creative role, his experience is just invaluable.”

The home fans were likely sensing an upset when the Cougars led 10-4 midway through the half on the back of two tries to Eli Roberts, the second via a miraculous through-the-legs pass from Nathan Smith at dummy half.

The Butchers kept themselves in the match through tries to Lachlan Stein and Aaron Beath, with a penalty goal to Zac Green moments before the break ging them a 12-10 halftime advantage.

Stein evaded several defenders en route to brilliant solo try to extend the lead to 16-10 seven minutes after the break and, when Damien Blanch scored off the very next set, the Butchers were cruising at 20-10. Another Blanch try looked to have sealed the result yet tries to Lachlan Yates and Roberts’ third – with three minutes left – set up a grandstand finish.