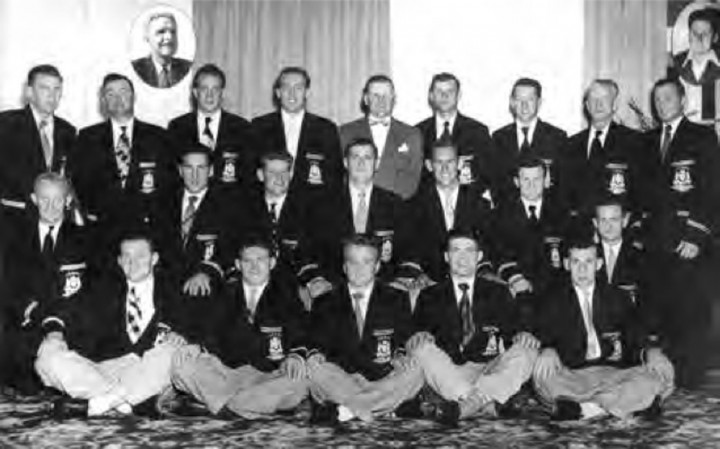 Thirroul had been “knocking on the door” in recent seasons. Now our chance was here and we grabbed it. Initially however there was a hiccup over the job of coach. The Illawarra League had organised a deal to place a number of players from the recent Kangaroos Tour of England at local clubs as playing coaches. The idea did not suit Thirroul as it planned to use champion half Noel Hill in that role. But the heavies were applied and we came up with Kangaroo lock Arthur Collinson in charge. Add to this Hill and Bruce Smith back from Maitland and our prospect were bright. Ironically Collinson had made the Australian team after playing a blinder in a Sydney grand final the previous year, nudging out Smithy who had been given a wink to prepare for the tour.

We got off to a good start to the season, winning our first four games. Then there were losses to Port and Brothers. CBC had great winger Brian Carlson at the helm. When Norths beat us 15-14 in a second round match we had the task of having to win our final three games to challenge for the minor premiership. We won them all, including a 13-11 come from behind win against Brothers. CBC was leading 6-5 at half time and only the safe boot of Bruce Smith winning the day.

During the final round win against Dapto (25-13) Jim Hamilton ran in three tries. We were then asked to play Wollongong in a playoff for the minor premiership. The Butchers beat city 9-5 before a big crowd of about 3,500 and gate takings of 282 pounds. Smithy – Illawarra’s leading point scorer for the second year in a row – booted three goals in tricky conditions, while Hamilton was over in the corner for our only try. We went in the semis as minor premiers, but shock, horror, we were thumped 20-10 by Port in a game described by the Mercury as “one of the best displays seen in recent years.” Referee Jack Underwood sent our hooker Stan Archer off for punching in the second half straight after he had scored a try to make the score 10-all. We fell in a hole after that and the Blacks went into the final against Wollongong.

Port eliminated Wollongong 10-2 in the final and on the same day Thirroul had a workout game against Group Six premiers Bowral. We flogged the Highlanders 64-18, we could smell a premiership.

There was much excitement in the town in the countdown to the Grand Final. The club arranged for manager Bruce Cambridge to supervise a team bonding at Headlands Guest House before the big game against the old enemy. This same tactic was tried in the previous season without success, but it sure did something this time.

We thumped the Blacks 20-7, four tries to one – the Butchers had taken the title.

Thirroul had the assistance of a stiff wind in the first half, but led only 4-0 at half time before a record crowd for the time of about 6000, and gate takings were almost 600-pounds. Our boy Hill was the star of the game and thanks to Archer’s domination of the scrums he gave his backs a feast of ball in the second half. Also in brilliant form was Bruce Smith, and the pair executed some great movements catching Port on the wrong foot time and again, sending Morgan in for two outstanding tries.

While our pack mauled the Port forwards, Paddy Miller and Kevin Mossman ran over their rivals in the centres. Mossman also picked up a try and Smith booted four goals.

What a season. The Butchers had scored 336 points for versus 196 against. Smith had scored two tries and kicked sixty goals. Wingers Morgan and Hamilton each scored 14 tries, Collinson and Archer six each. Success also meant a clash with the South Coast champions, Berry. Unfortunately after a week of celebrations – oh what a week – it was a bit late for football. Berry gave us a hiding 35-9. We entered the game without Miller and Mossman, Hill came off with a busted nose early on and Aggett was sent off for an alleged puching offense.