With white and blue running through his veins from birth this fella will replace Rocka Bob without a beat being missed, although he will have big shoes to fill the committee has chosen the right man for the job. 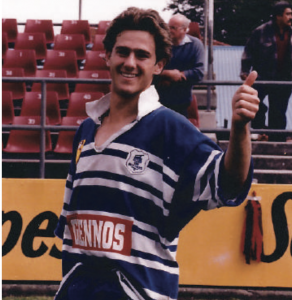 His family rich with Butchers heritage dating back to the early 1940’s through his grandfather and
then his father coming through the junior ranks to play grade in the late 60’s to his own feats as the halfback in the 1999 U18’s Grand final victory.

This guy has been around the club all his life in some capacity, recently you could of found him on the field in a fluro yellow shirt as one of the grade runners but now his attention will turn to being the voice of Gibson Park.

The club would like to introduce t Josh “Dougie” Millington who will be the new voice that you will hear using Rocka Bobs catch cry “Support the people that support the Butchers”. Josh Loves a microphone and will fill the position no trouble at all and I’m sure he will come up with a few funny calls through out the next 25 years of Gibson Parks voice.